Play Framework applications use the JVM in the same way as any other Java application. In the previous article, I showed a start script for a Netty based play application that enabled JMX in a secure way, so we can monitor the status of the JVM.


Here's an example of a running Play process.

From this, you can extract the JMX port (jmxremote.port=7020), and find the JMX username/password file (jmxremote.password) - All three bits of information are necessary to connect.

We can also check the GC log if necessary (Xloggc:/opt/play_app/logs/gc.log)  - The information isn't quite as good as using JMX directly, but is useful for a quick diagnosis of a problem.

Note the last field - GC time in seconds. This should be nice and low - certainly sub-second.

Out-of-memory problems would lead to a log with repeated Full GC lines - similar to:

Jconsole is an application shipped with the Oracle JVM (and others) that enables us to connect to the JVM remotely via JMX and view internal metrics. Here's a very brief introduction to what it can do. 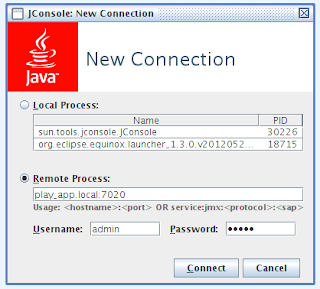 The preferred way to run it, is to run jconsole on your personal machine, and connect remotely to the application JVM. Start it up, feed it:
the address of the machine running the application, the port it's running on
the username and password for JMX. 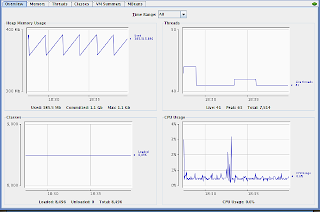 Here's Jconsole's overview screen. Important things to note here are CPU usage of the application, and the memory consumption.

This sawtooth memory consumption graph is ideal - The base of the sawtooth should be flat - indicating memory usage after garbage collection is stable, and not increasing. Continuously increasing base memory usage could indicate a memory leak, code deficiencies, or simply insufficient memory assigned. 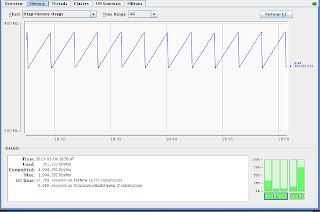 Here's the display of the memory and GC statistics. Compare the graph values to the Max values on the display below to show much of the heap has been used.

Explaining how to do GC tuning and analysis of memory usage is worth a series of articles on it's own, and this is a subject I'll cover at a later date. Until then, here a good article to get you started.

GC logging is a relatively blunt tool, though log analysis tools like GCViewer help. Similarly, you can't really leave jconsole connected 24/7 to see what your application is doing.

The answer is to collect selected JMX metrics with another application, and store them. There are many applications that can do this - some of my favourites are.

Having high-resolution JMX data at the time a problem occurred can be invaluable in solving problems, as you can trace what was happening immediately before the problem occurred.

Posted by JMIPS - IT Performance Consulting at 19:25 No comments:


In the previous article, I went through a few common options for getting your Play code onto a target system in a controlled manner.

Now, here's the puppet module I use for configuring and running the Play application itself - you can download it from http://www.jmips.co.uk/play_framework/ -  This should be easy to get working with some basic Puppet experience.

The "play_framework" module is a puppet defined type. The idea is you call it, as in  example_play_app/manifests/init.pp

# this defined-type does all the heavy lifting to create a service
# for play_framework stuff, we just need to feed it a name and uid/gid
play_framework::play_service { "${module_name}":
play_uid => '995',
}

By default, they play app will take it's name from the module name - so likely you'll want to rename it at some point. After you've renamed the module directory and class name, you need to choose a free UID to run your play application under. The name of the user created will be named after the application. Beware - avoid hypthens in puppet module names! It is possible to use hyphens, but it will complicate things.

After you've chosen a name and UID, take a look at the templates directory for the example play apps.

The first file is the logger configuration - you should configure your play application to look for this file, and configure it appropriately

The second is the script used to start the application - you should adjust this to your needs.

In this application we're using Netty, configured to run on port 9000 and JMX is enabled with a username/password. Java heap size is set to 256Mb, CMS GC is enabled, GC logging is enabled. All of the file locations use the puppet module name.

The third file -  env-application.conf.erb  - contains application specific configuration. Use this to set configuration that varies between environments - ie where a database server is located.

The defined type module may need some adjusting for your environment, the one I use is configured for Ubuntu, using Upstart to run the Play service.

Again, take a look in the templates directory for this module.

The JMX files relate to the usernames/passwords and permissions for JMX connectivity. See this document to set this up correctly. My templates use puppet variables to allow for multiple play apps/jmx passwords. Either set these variables in your site manifests via extlookup, or hardcode the JMX config into the modules (not recommended for good security!)

The Upstart file is used to start, stop and monitor the Play application.

Upstart will ensure the application is running, monitor it via it's PID, and restart it if it crashes. You should be able to start/stop/restart the service with "service example_play_app <stop/start/restart>"

Hopefully this should be enough to get your play application started and running. Next time, I'll briefly cover using JMX to monitor and tune the JVM of your Play application.
Posted by JMIPS - IT Performance Consulting at 16:43 No comments:

I've been working with a lot of Play applications recently, and was asked to share how I built the automatic deployment, config management, integration into Linux, etc.

In this post I'll cover the automatic deployment options, and it will be solely focused on how to get binaries onto systems in a controlled and repeatable fashion.


This all assumes you have a working build of your Play application already.

I'm showing the raw commands to run to get it to work, but this all should be scripted/automated with your automation system of choice. Here's an example shell script, but Mcollective or Saltstack should work too.


This is quite simple, and perfect for a fast deploy from a Build/Test system. I would recommend not using this for production deployments, as it's difficult to guarantee the exact version of what you're deploying!

This assumes you have a working Play app build in Jenkins, and successfully built binaries, usually with SBT's "dist" command.

On your target server to run the Play application.


This just retrieves the latest Jenkins artifact for the build job, and writes it to a known location on disk

Clean up the final destination for the Play app - assuming you've stopped it already!

The result of this should be /opt/<play_service_name>/lib filled with the libraries from your Play application. You will likely have to tweak the names slightly, as the outer ZIP wrapper is related to the name of the Jenkins job, and the inside ZIP name is related to the Play project name.

At this point, you're ready for Puppet to take over.


It's quite common to use a build system to populate a filesystem based binary store. eg. /mnt/play_binaries/<play_project_name>/<version>/<project_name>.zip

Implementing this is outside the scope of this article, but I'd use the Copy Artifact plugin in Jenkins.

To deploy from this, use wget/rsync or similar to copy the file to your target system in the /tmp/play_deploy/ directory, then, as the previous example


Again, at this point you should have /opt/<play_service_name>/lib populated with the Play application libraries, and you're ready for Puppet to take over the next step.

This assumes you've published your binaries to Maven, using SBT or similar, as in this example.
Be aware that SBT 0.11 does not properly generate the Maven metadata, the result of which is asking for the "latest" version will not work, but asking for a specific version will. See here for a solution, particularly the sbt-aether-deploy plugin.

If you chose to use Maven for deployment, be sure you know the difference between Release and Snapshot versions, so you're able to guarantee the versions of your code, and all dependencies in each production release.

To deploy, you'll need a custom maven XML file like this one, on the target system. - call it <play_app_name>.xml


Assuming you've got your local Maven config set up correctly (ie. your ~/.m2/settings.xml as in this example ) so Maven on your target system can see your internal Maven repo, you can now use Maven to request your libraries.

Now, as before, move it to the correct place.


Now the code is deployed, you're ready for Puppet to take over.


Systems Admins already have tools to automatically check/deploy/upgrade the software on the systems under their control. RPM and deb are the most popular formats for Linux

Converting Play applications (typically distributed in ZIP format) into these formats is a little more involved, but worth it for larger system estates. I'll describe the process, but the specifics are a little outside a blog post. Perhaps I'll cover it in the future.

Essentially, the idea is as part of your build process, to take the ZIP file, convert it into a RPM/deb, then upload it to your repository. Then it will be available to be installed, using native OS commands, as if you were installing a new version of Apache HTTPD.

This project aims to bring this support natively to SBT, but until then, you're going to have to script this yourself, with the help of some Jenkins plugins like this.


Next time I'll cover the Puppet module I use to automate the configuration and integration of the Play app into the Linux environment.

Posted by JMIPS - IT Performance Consulting at 18:51 No comments: